Mr Mehdi Eker – Government Minister, Ministry of Food, Agriculture and Livestock, took to the podium earlier this morning and reiterated the importance of Wheat and Health, emphasising to all the extreme importance of this topic. 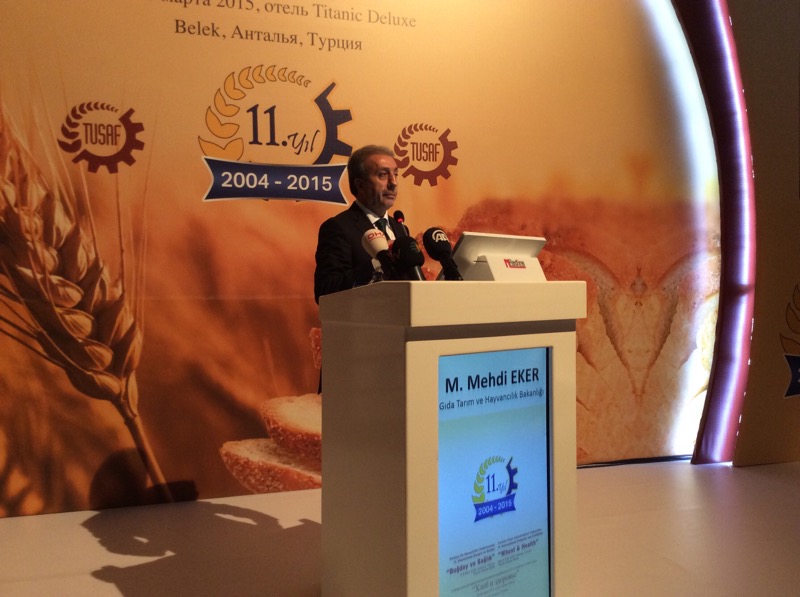 Raising once again the topic of not eating any white foods, Mr Eker went on to explain that we have been consuming bread as a product for over 1,000 years, and surely this should have been enough time to have identified if this product should be consumed by humans. Quite the contrary, it has been a stable food of our ancestors and they have all been very healthy.

Mr Eker also continued that Anatolia or Asia Minor as it was known is one of, if not, the richest places on the earth. having over 4,200 plants and species under protection. For 1000s of years humans have farmed this land for wheat for human consumption.

He continued with it therefore being logical to assume that in this case the wheat and various plant variants will have been cultivated and will have entered our genes, and our genes must have over 1000s of years become accustomed to them.

We must remember that Anatolia is the birthplace of wheat and over many years has spread all over the world and in regions like the Americas and Europe it is a basic staple food for millions. There are of course other basic staple foods in other regions which have a different typography or weather system such as rice and maize, however it is well know that if these three; wheat has a much, much higher nutritional value.

Globally, people not only eat the basic food stuffs, they also eat food prepared by others and processed foods. Any new foods produced today are taken to the global market very quickly with advertising and good logistics, this is why we have seen an increase in refined foods being consumed.

What is critical, is we need to synthesise the knowledge at hand with wisdom – if not we will have knowledge pollution, and what we eat will become a burden.

Mr Eker continued, campaigns against specific food stuffs is not wise. In reality we each need different food categories to a certain amount for a balanced diet.

Important of course is the amount of each food stuff you consume. 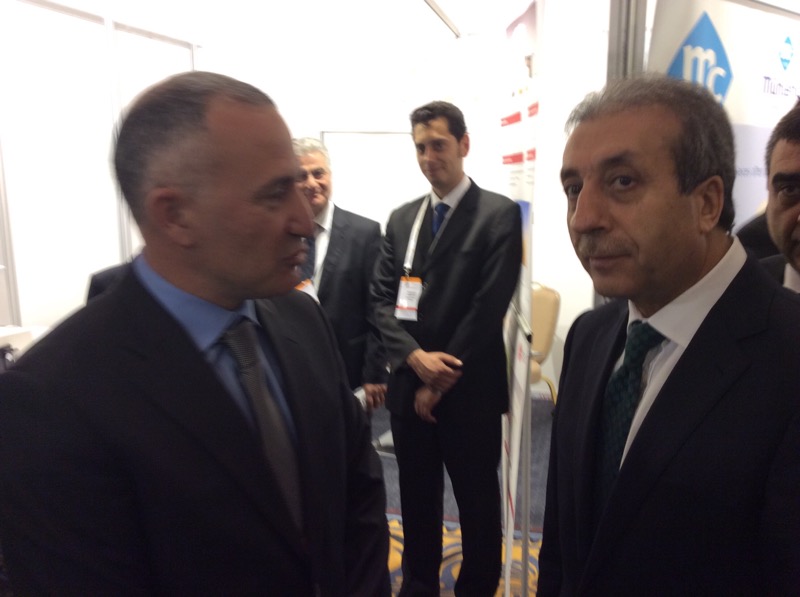 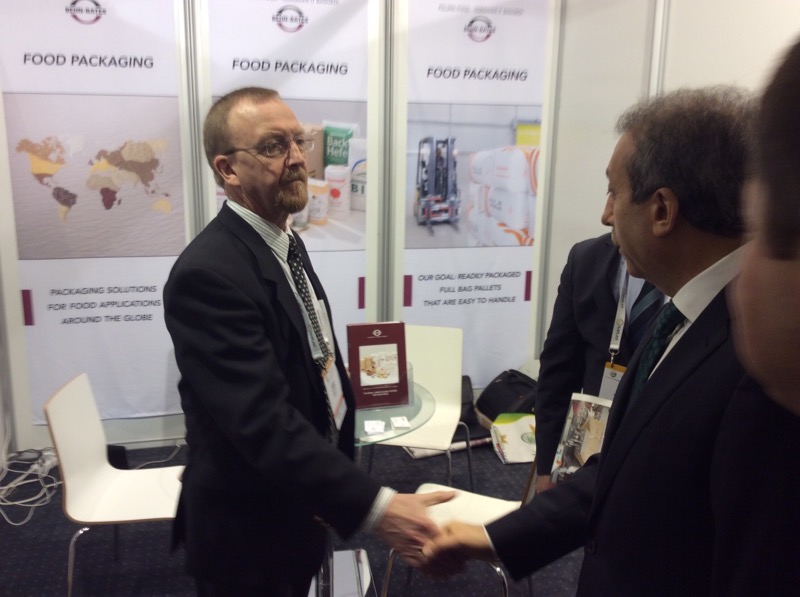 Wheat and health is the theme of TUSAF this year – which means what we should eat and what we should not eat. Over the years we have seen historical activities against specific food stuffs for example:

Mr Eker went on to talk about the wheat and flour industry, pointing out that Turkey is now either number 1 or 2 in the world for wheat exports, and in 2002 they were significantly lower. He was keen to point out that this needs and deserves attention.

From 2003 to 2013 Turkey saw huge growth, not only did they grow more, more was processed and significantly more exported being the surplus. In addition to this Turkey imported over 40 million tons of grain worth over $16.5 million, after it was then processed and exported.

Mr Ekin announced, we must target 1 billion and exceed this milestone. We are the leaders around the world, I am proud to announce this at such an international conference.

On top of this, our pasta exports have gone up 30 fold, in 2002 we were the 7th largest and in 2013th we were the 2nd largest exporter of pasta, 2014 figures are not in yet but I suspect we will either hold our position at second or jump to number one. 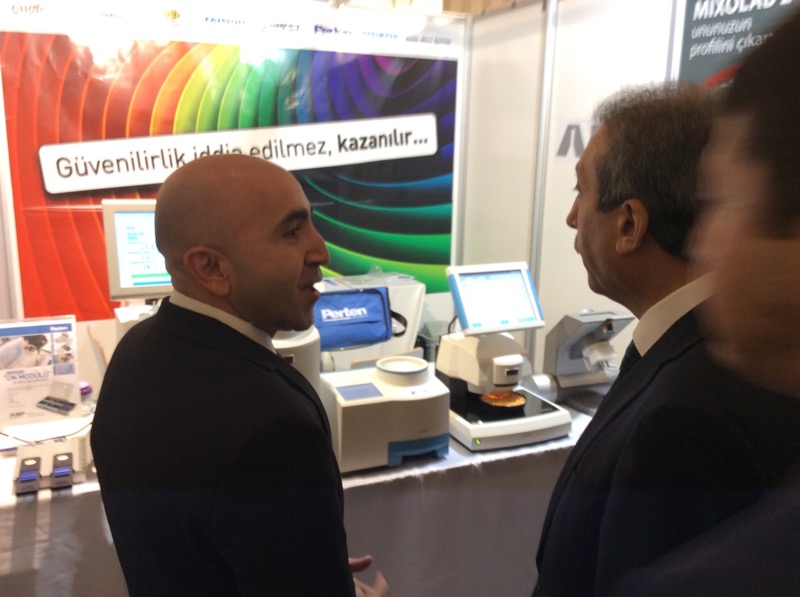 Mr Eker explained a few statistics, 54% of all registered farmers in Turkey are producing wheat with more than 1 million people employed. He was proud to point out the Turkish governments involvement in certifying seeds, some of which are developed by government agencies and some in the private sector. Mr Eker also reminded everyone that the Turkish Government is meeting 22% of all the wheat production cost, through such areas and soil analysis for farmers.

Explains that they are behind 464 projects where they have spent over 100,000,000 Turkish lira of which 213 of these projects are directly related to Wheat processing.

And for the future they are protecting seeds and genes in Ankara, where they have the worlds 3rd largest gene bank. Alongside which they have opened anew biological centre where they can study new seeds and where it used to take 10 to 12 years to bring a new seed to market, they will now be able to do it in 7 years.

Mr Mehdi Eker then went on a longer walk around the exhibition, photos below:– 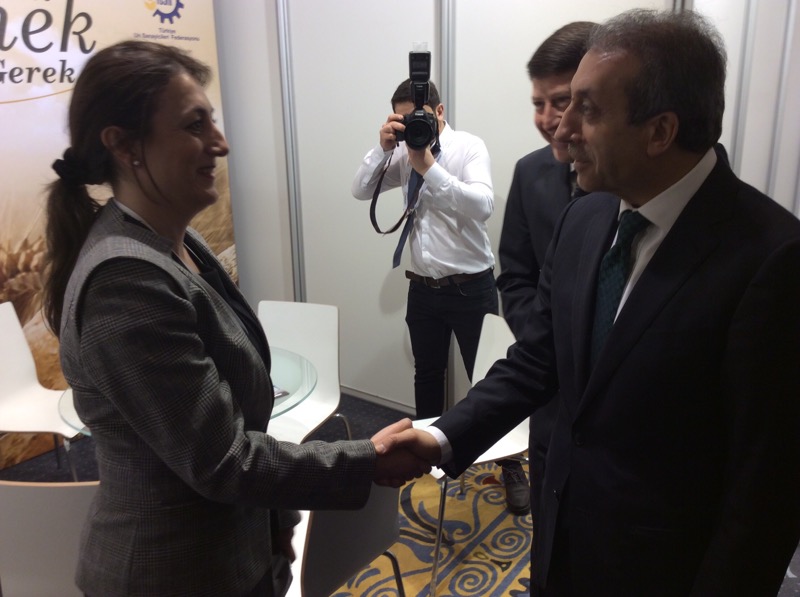 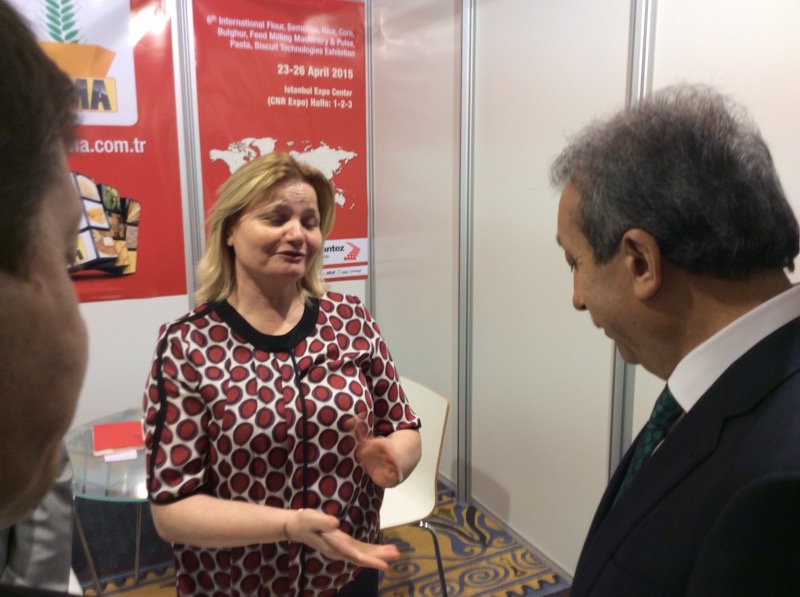 Mr Erkin meets with the Parantez Group, organisers of next month’s IDMA Exhibition 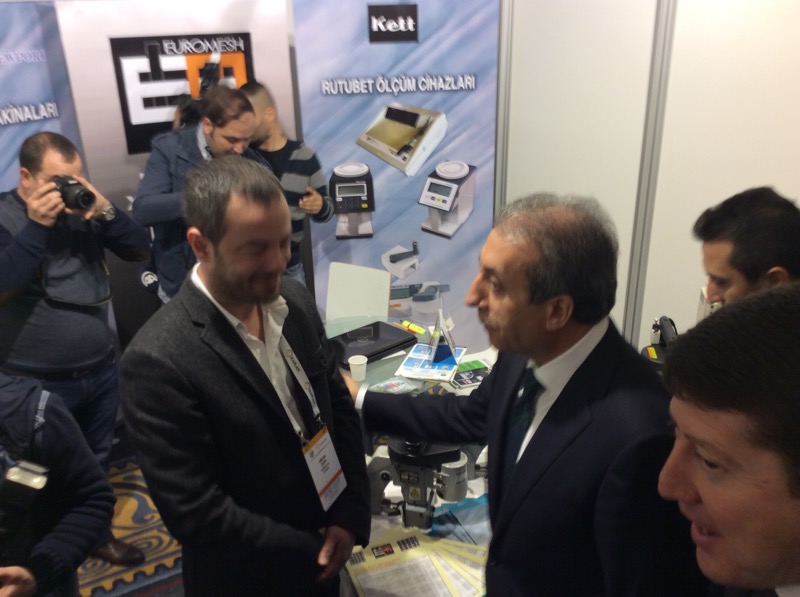 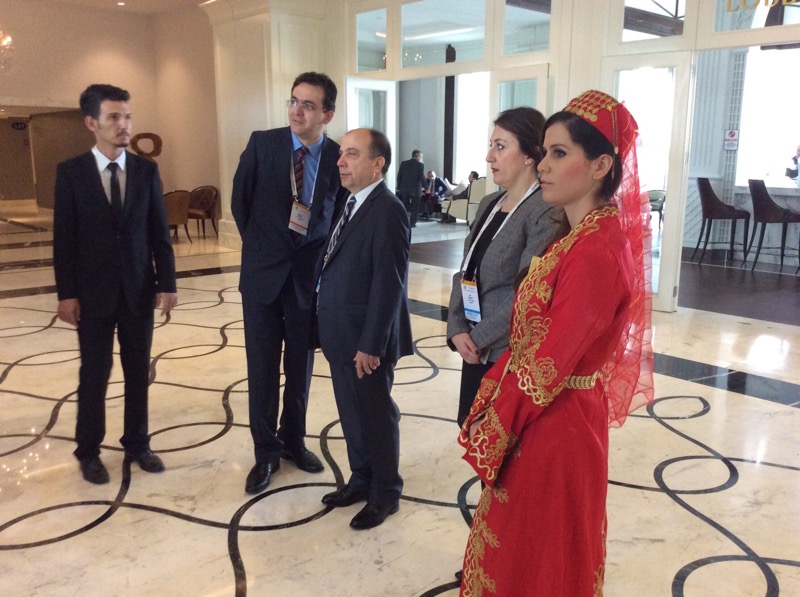 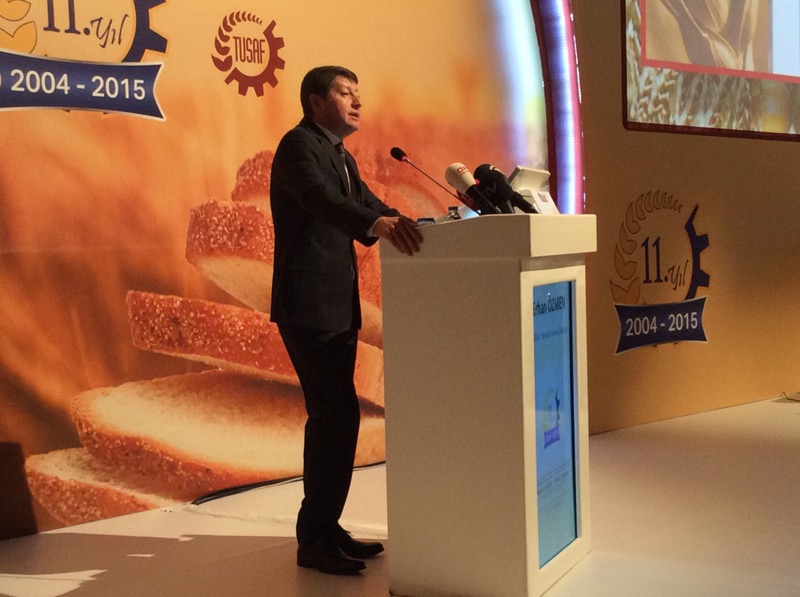 After a moving 1 minute of silence to recognise the many industry members who died in 2014, to bless them and their families, everyone then stood for the national anthem before Erhan Ozman, Chairman of the executive board took the stage for his opening speech. With a focus on Wheat and health there is Mach to cover in regards to the issues taking place regarding the increased movement not to eat white foods including breads. Mr Ozmen continued asking the conference to recognise international women’s day on the 8th March, repelling the story of 1857 on the 8th March, when in New York women campaigned for their rights and 129 lost their lives in the demonstrations. He went on to explain that it is normal to think that:
a) a man is successful until he fails.
b) a woman is a failure until she succeeds
He went on to say, that this is changing and must change faster, it is the women who care for and nurture our young with love and affection just like Mother Earth who has supplied us with wheat which we have been consuming for 1000s of years.

Mr Ozmen continued to talk about the continued momentous growth in wheat yields and the growth in exports and finished of with a reminder to continue the combat against diminishing the importance of bread. His final words were, “We hope the conference will benefit all humanity”. 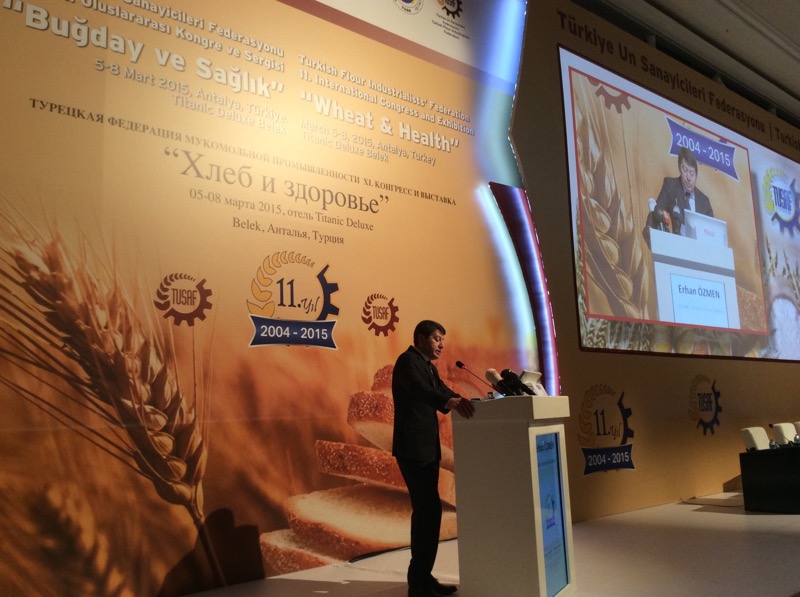 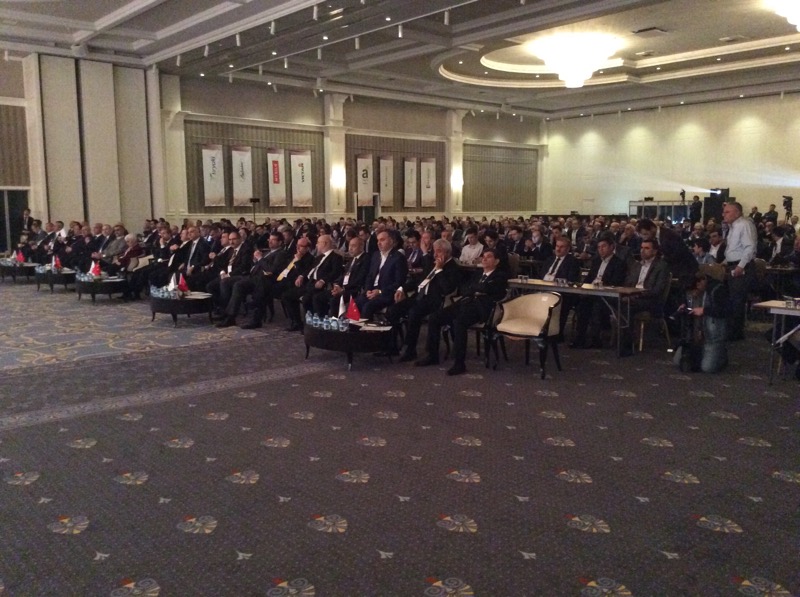 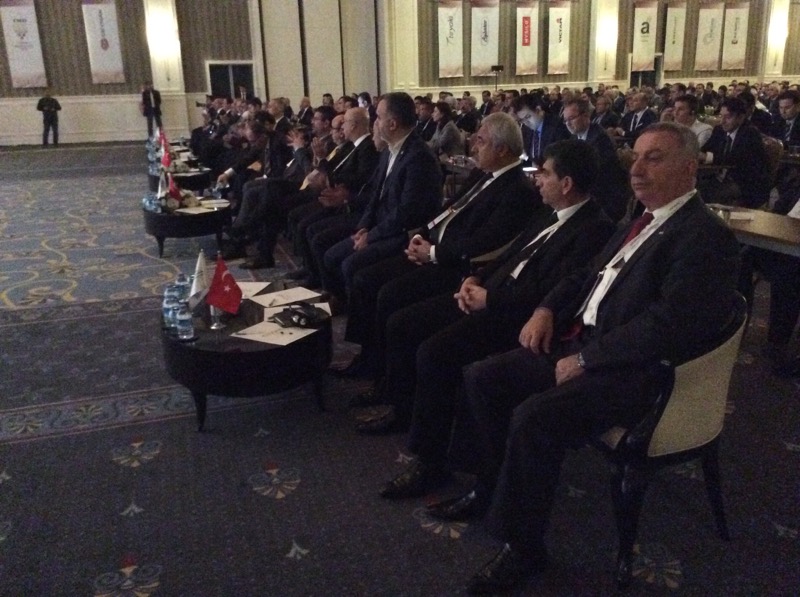