Perstorp has signed an agreement with Chemko a.s. Strážske for the acquisition of its penta and calcium formate businesses, related technology and certain assets. It does not include the manufacturing plant in Strážske, Slovakia, any real estate or employees. The transaction is fully in line with both companies’ strategies going forward. For Perstorp, this is part of an ambitious investment plan to increase its polyol production and presence on the calcium formate market.

both our current and new customers. Going forward, we plan to further increase capacity to support our customers’ long-term growth”,

Calcium formate is a source of highly digestible calcium for farm animals and it has antimicrobial properties in feed. A lowered pH-value in the feed supports the acidification of the stomach contents. Perstorp markets its feed grade calcium formate as ProPhorce™ AC 200.

The polyalcohol Penta is used in applications such as alkyd resins, PVC stabilizers, synthetic lubricants, varnishes, and other products. Perstorp is now producing Penta in three different production plants in Germany, the US and Sweden.

The worlds largest exhibition of its kind, Eurotier brought together 2,445 direct exhibitors including Perendale Publishers who were media-supporters for the event. Dr. Reinhard Grandke, Chief Executive Officer for Deutsche Landwirtschafts-Gesellschaft (DLG) who organized it announced that, “EuroTier 2012 has reached new record levels,” when speaking to the press in HaNnover at the close of EuroTier on 16 November 2012.

Perhaps more compelling proof of Eurotier’s stature of success this year has to be that half of the 2,445 that exhibited had come from outside of Germany, representing a 40% increase on 2010.  The number of visitors was also up by 10% this year on the previous forum, 160,000 of them went for the latest information and future technology which is crucial to farming in the 21st century. 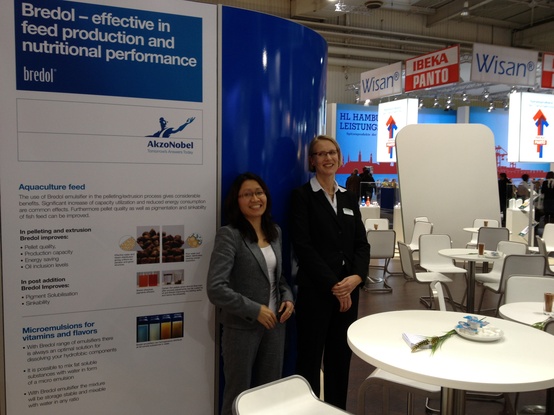 Akzo Nobel, were one of the industry leading companies that Darren had the pleasure of meeting.

sector of the industry with around 22% of the IMD being made up of companies who specialize in animal-feed based activities. Perendale Publishers very own International Sales and Marketing Manager, Darren Parris, managed to catch up with some who attended including AB Vista, Norel and Sonac. He said, “I’ve loved meeting up with so many of them with this being my first Eurotier, you get so much more out of meeting people in person and to have everybody under one roof has been fantastic.”

BioEnergy remains a very important subject as we continue to try and source safer and more economical ways of fueling the planet. BioEnergy Decentral reported a constant number of around 42,000 visitors. Despite the current market situation in Germany, the share of international visitors increased by 12% compared with 2010, which is attributable above all to the technology leadership in this industry.

We’ll have more from our Eurotier round-up over the coming days, and work has already begun on planing for the next EuroTier which will be held in Hannover from 11 to 14 November 2014. In the meantime why don’t you tell us your favourite story from the show by commenting on this article, you can also comment on our twitter page @IMD12.

We at Perendale wish to thank everybody that we spoke to throughout the event and look forward to seeing you again soon!

The winner of the 2012 Nabim/HGCA Milling Wheat Challenge has been announced reports Farmers Guardian. Bedfordshire farm manager Andrew Robinson has taken this year’s award with his 2,232acre plot which has been growing for over thirty-years.

Despite small marginal gains the Farms manager at Heathcote Farms, near Toddington, was praised by judges for his engagement with the milling trade, his solid business foundations and his ability to aggregate them for a positive net business benefit.

There were two other finalists, Andrew Martin of Broadstream Farming, Kent and Mark Boyd of John Boyd Farms, also from Kent.

The duty of judging this year’s winner fell to Martin Savage of NABIM, Pat Thornton of HGCA and Lincolnshire farmer Mark Ireland. They said that each finalist demonstrated attention to detail and a strong commitment to the milling trade’s needs and processes.

All three finalists demonstrated they were forward-thinking and could consistently grow quality crops of bread-making wheats – even in a year as challenging as 2012,” he added.

“All three finalists were on top of their disease control and when we made the farm assessments in June, all crops were full of potential. Unfortunately, the first 14 days of grain fill, which are so important, were blighted by bad weather . The result is that milling wheat supply is more than one million tonnes down on the national forecast,” said Mr Thornton.