The International Milling Directory (IMD) will enter its 22nd year when we publish the new edition online and in print in July. As we were scanning the web for inspiration, this one page on Engormix’s site really caught our attention.

The 2009/10 edition of the International Milling Directory is featured here, and amazingly still exists online today:– 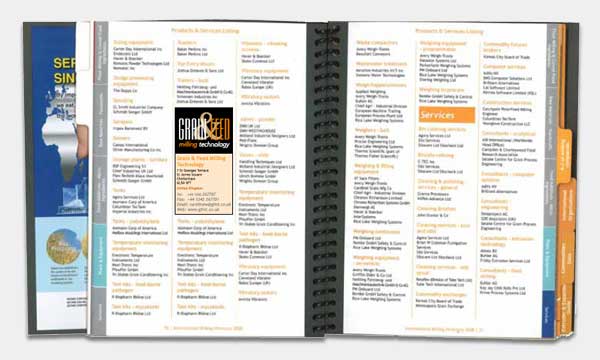 For the new edition, 2013/14, the design and production team at Perendale Publishers are gearing up for a functional and attractive product with all the content that you provide. The International Milling Directory is updated before each publication to ensure accuracy, trust and reliability for readers and users. Web, online and mobile app options are popular than ever before, increase your visibility to customers through web, online and mobile app plans today.

Go to IMD Online to register and update your listing — good value options are avaliable for increasing your listing beyond the free option of 1 line.

This segues for me to reveal that a regular column for the International Milling Directory will be included in Grain & Feed Milling Technology magazine. Watch this space for a full splash and read the magazine online here: –> www.gfmt.co.uk/online.html

Register and update your listing for your organisation now at the International Milling Directory. Free and paid options are avaliable for a short time in order to be in the new edition for 2013/14!

The Perendale Publishers International Milling Directory team are in Atlanta, USA this week for the IPPE show. On Sunday the team set up the stand as the site was already a hive of activity with people keen to see the latest food and feed developments.

Day 1 got off to a good start and the stand is looking marvellous. One of the first visitors was Carlos Cesar Pavesa, director and CEO, Engormix (pictured below with Perendale’s Roger Gilbert).

If you’re at the show come and visit us on booth 1700 in Hall A2. More information about the International Milling Directory is available at www.internationalmilling.com 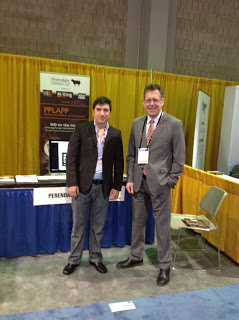 Roger (Perendale Publishers, Stand 1700 in Hall A2) is visited early on the opening day of IPPE  by Carlos Carlos Cesar Pavesa, director and CEO of Engormix – the Latin American online news service for the feed industry.

On November 13th 2012, at EUROTIER tradeshow, The European Probiotic Association (EPA) awarded the Jules Tournut Probiotics Prize 2012 to Peter de Schryver, from Ghent University, for his innovative research project on the use of microbial products and microorganisms in animal nutrition. The Prize was awarded in presence of members of the EPA, FEFANA, representative of the EPA Scientific Committee and journalists. Altogether, the quality and diversity of research projects submitted demonstrate that probiotics benefits go beyond zootechnical performance and pave the way for innovative applications in the field of immunity, but also stress management or even reproduction.

The aim of the EPA Jules Tournut Prize is to support research and innovation in the field of probiotics for animal nutrition. Professor Joaquim Brufau, from IRTA, who represented EPA Scientific Committee, which formed the judging panel of the award, highlighted the scientific quality and diversity of applications explored by the candidates, who came from all over the world, beyond the boundary of Europe. The studies submitted covered a range of target species and benefits, sign of the broad potential of probiotics for sustainable animal production.

Peter de Schryver’s project aimed at improving performance and welfare in aquaculture thanks to an original approach: the use of poly-β- hydroxybutyrate (PHB), which he describes as a microbial energy storage polymer, an important source of energy for bacteria. PHB thus appears to play a prebiotic role in aquatic species, resulting in improved performance and resistance to pathogens. By combining this compound to a probiotic bacteria (synbiotic approach), the young researcher showed that both agents had a synergistic effect to protect fish against pathogens (use of Artemia franciscana as a well-studied model of aquaculture specie).

Nevertheless, when asked if this new approach could be applied to various species Peter de Schryver reckons that “it could certainly work in land farmed animals that have an even more developed digestive system”. The use of PHB in synbiotic approach for animal nutrition thus appears as a promising field.

Moreover, the young researcher is convinced that, especially in aquaculture, the digestive microbiota is often underestimated. Another interesting aspect of his study is that he looked into the Artemia microbiota richness and diversity and found that PHB had a positive effect on the microbiota diversity and evenness, an asset for microflora stability and protection against pathogens

Check out this video on the grinding process in the poultry feed production by M. Baumann of Buhler.
By: Marco Baumann