On November 13th 2012, at EUROTIER tradeshow, The European Probiotic Association (EPA) awarded the Jules Tournut Probiotics Prize 2012 to Peter de Schryver, from Ghent University, for his innovative research project on the use of microbial products and microorganisms in animal nutrition. The Prize was awarded in presence of members of the EPA, FEFANA, representative of the EPA Scientific Committee and journalists. Altogether, the quality and diversity of research projects submitted demonstrate that probiotics benefits go beyond zootechnical performance and pave the way for innovative applications in the field of immunity, but also stress management or even reproduction. 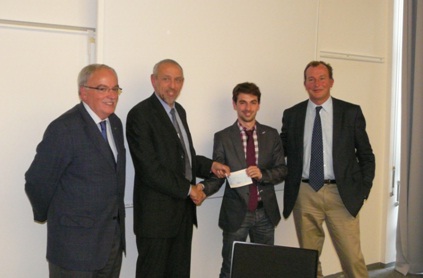 The aim of the EPA Jules Tournut Prize is to support research and innovation in the field of probiotics for animal nutrition. Professor Joaquim Brufau, from IRTA, who represented EPA Scientific Committee, which formed the judging panel of the award, highlighted the scientific quality and diversity of applications explored by the candidates, who came from all over the world, beyond the boundary of Europe. The studies submitted covered a range of target species and benefits, sign of the broad potential of probiotics for sustainable animal production.

Peter de Schryver’s project aimed at improving performance and welfare in aquaculture thanks to an original approach: the use of poly-β- hydroxybutyrate (PHB), which he describes as a microbial energy storage polymer, an important source of energy for bacteria. PHB thus appears to play a prebiotic role in aquatic species, resulting in improved performance and resistance to pathogens. By combining this compound to a probiotic bacteria (synbiotic approach), the young researcher showed that both agents had a synergistic effect to protect fish against pathogens (use of Artemia franciscana as a well-studied model of aquaculture specie).

Nevertheless, when asked if this new approach could be applied to various species Peter de Schryver reckons that “it could certainly work in land farmed animals that have an even more developed digestive system”. The use of PHB in synbiotic approach for animal nutrition thus appears as a promising field.

Moreover, the young researcher is convinced that, especially in aquaculture, the digestive microbiota is often underestimated. Another interesting aspect of his study is that he looked into the Artemia microbiota richness and diversity and found that PHB had a positive effect on the microbiota diversity and evenness, an asset for microflora stability and protection against pathogens