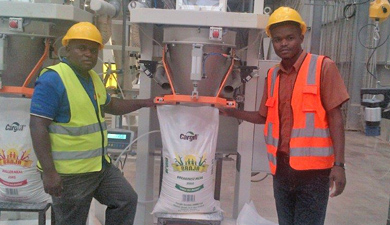 Maize is a staple food in many parts of sub-Saharan Africa, including Zambia, which produced about 3.4 million tonnes of the crop in 2014. It is widely used to make mealie-meal – finely ground maize made into flour – that consumers depend on for an array of traditional dishes.
For a variety of production-related reasons – including the cost of milling and transportation – mealie-meal prices are volatile, making it unaffordable for consumers in much of the country. To address this, the Zambian government is encouraging smaller, more localized mills to improve food security by reducing the cost of food.
Cargill has responded to this need with the launch of the first commercial maize mini mill in the Eastern Province of Zambia.
Located in the capital city of Chipata, this accessible mill will provide local rural and urban farmers with a reliable, consistent market for their maize, as well as produce competitively priced mealie-meal for consumers.
“This new maize mini mill underscores our commitment to the economic growth and prosperity of Zambia,” said Lezanne van Zyl, Cargill’s general manager in the country. “It aligns strongly with the Zambian government’s clearly stated desire to develop a thriving agricultural sector.”
According to van Zyl, the mill will produce high quality white and roller maize meal for the domestic market, including Cargill’s in-house brand that will be available in 5kg, 10kg and 25kg bags.
The U.S. $2 million high technology mini mill has a milling capacity of 2mt/hour, and offers a distinct advantage in the maize meal market in Chipata and the surrounding areas.
“As the mill will source local maize and produce mealie-meal right in in Chipata, transport and fuel costs will be reduced and Cargill will be able to offer a competitively priced product,” said van Zyl.
Over the next few years, Cargill plans to build additional mini mills in other rural locations in Eastern and Muchinga provinces.
“By bringing these mills into rural areas where maize is produced, we hope to target high food costs and food insecurity,” said van Zyl. “In addition, the mills will provide the local community with opportunities for employment and access to skills training. It’s a fine example of how a small facility can yield some pretty big results.”