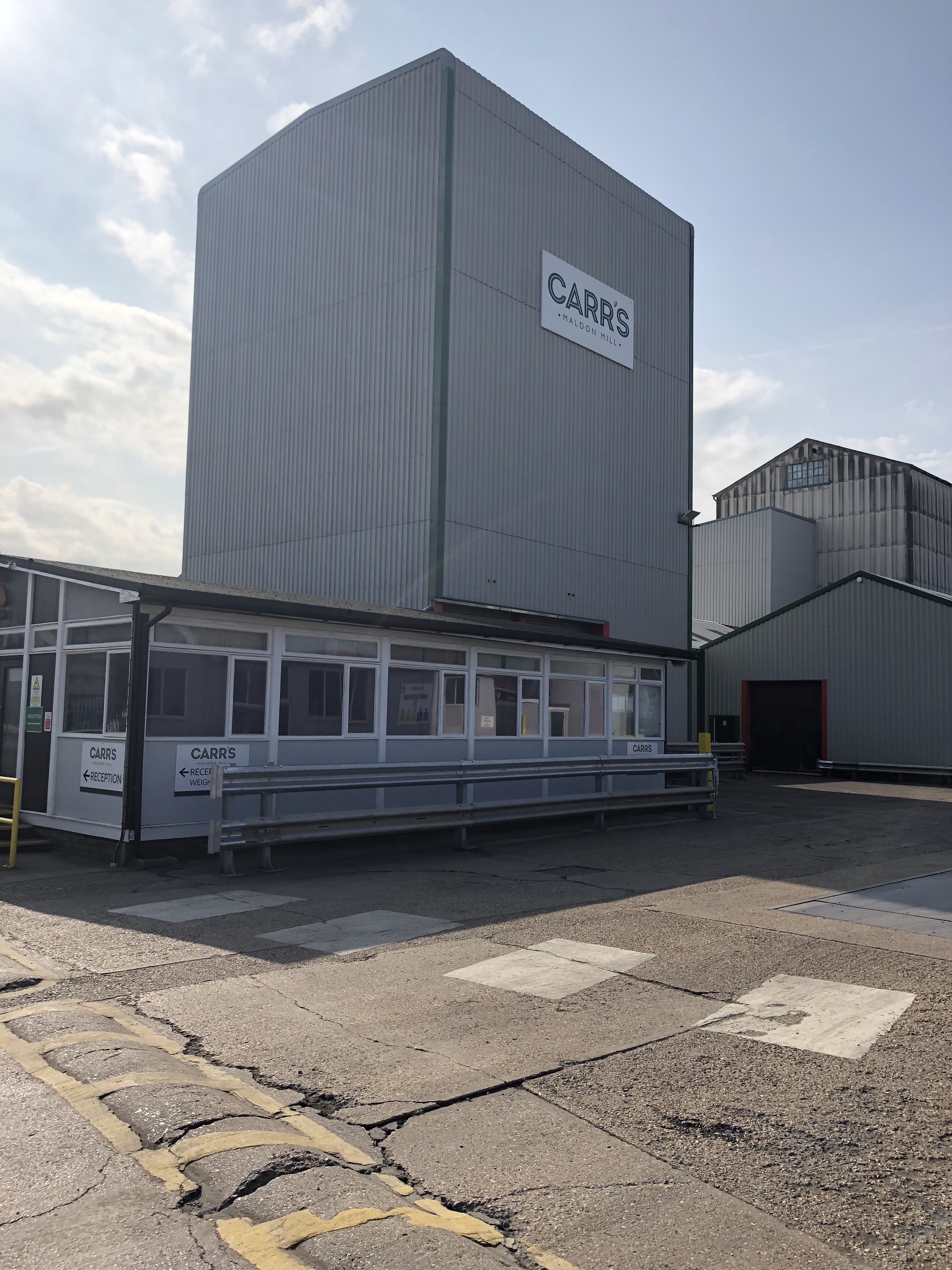 Visiting Carr’s Flour Mill in Maldon gave me a real insight into the life of a working mill. The impressive mill was founded in 1836 by Jonathan Dodgson Carr who built it on the principles of quality, innovation and understanding the needs of customers. The mill still retains those core values and has been completely transformed into a truly 21stcentury operation.

The mill was built in 1896 for Samuel Garrett. It later belonged to William Green and Sons, then Green Bros, and subsequently Carr’s. Along with the other Carr’s mills it was sold to Whitworth’s in 2016.

Together with Carr’s other mills at Silloth and Kirkcaldy it processes 300,000 tonnes of wheat a year. Inside the mill, state of the art modern milling equipment takes centre stage – from the enormous sifters to the Buhler roller milling machines. It tests protein levels and sifts out any foreign matter in the wheat including metal and mycotoxins.

Carr’s opened up its mills to a group of around 30 people for a special open day. The group included farmers from the Dengie region of Essex and bakers from across the UK. Wilfrid Dorrington, of Dorringtons Bakery in Sawbridgeworth along with Chris Hughes, Dorringtons general manager and Sam Robinson of the Good Things Brewing Co joined the group.

The Good Things Brewing Co has discovered a way of dehydrating its spent grain for the baking industry. They produce so called super flour which is gaining traction in the wheat market for its quality. It is a truly ethical company reusing and recycling whatever it can in the process of making top quality artisan beer.

Sam Robinson was at Carr’s to find out what he could about the milling process. He was fascinated to learn about how Carr’s deals with its waste products.

It was quite an eclectic group of people – many had been buying flour from Carr’s for many years. We toured the distribution function of the mill – watching the massive lorries load up with either bulk flour or bags of flour – from wholemeal to special artisan flour for the smaller bakeries.

The amount of flour they produce is simply amazing as well as animal feed which is sifted out from the wheat at an early stage of the milling process. The outer layer of the wheat is removed ready for moulding into animal pellets.

The bran husks are all removed and separated from the endosperm before going on to be sifted in huge sifting machines which rumble along 24 hours a day seven days a week.

The mill never stops and it is down to the logistics team to always be on hand to pick up either a bulk load of flour or pallets of ready packeted flour. Huge pallets of the packeted flour sit waiting to be transported to the waiting bakeries in a fleet of lorries.

Before being shipped out to the customers the wheat is tested again and again to ensure its quality is top notch. Each load of wheat is tested before it enters the milling process with sophisticated machines which test the protein levels of each load to ensure it is correct for flour. They receive wheat from across the globe at Carr’s. As well as wheat from the Dengie farming community in Essex, it collects wheat from Canada and France and Germany to mill.

A recent addition to the milling operations at Carr’s is chapati flour. The team at Carr’s sourced original milling equipment from India. It had to be cleaned up prior to use in the mill and now turns out top quality chapati flour.

Canadian flour is milled, providing a strong flour for baking which is needed in some mixes of flour. They don’t add any enzymes during the milling process to ensure the flour they produce is clean and natural.

Carr’s have to deal with the constantly moving wheat markets and have a special wheat buyer Struan Cessford who says this year has been relatively good in the UK. The dry weather has created a hard grain which is lower in protein levels and needs more conditioning – soaking in water.

“We source only the best wheat from home and abroad, and we have invested heavily in the latest milling technology.,” says the company’s website.

“Our ﬂours are created with attention to detail, supplying everyone from home and independent bakers to retail multiples and major food retailers.

“And in an often volatile wheat market, our people work closely with our customers to minimise the impact of unexpected price spikes.”

Knowing customer needs to is integral to the philosophy at Carr’s. They know the market and adapt to whatever the market needs.

It is this attention to detail which singles out Carr’s as a top quality mill and it is the attention to its staff which makes it a special place to work.